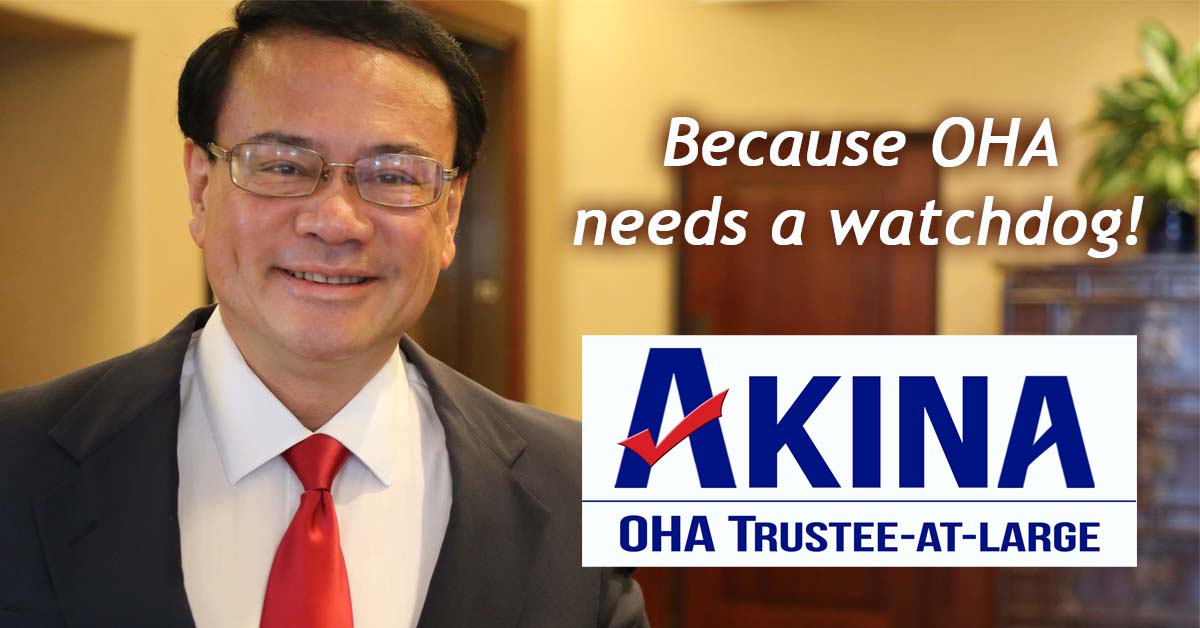 In this General Election, it is vital everyone vote for OHA Trustees.

The only question is…

Will you vote for the same 'Old Guard' Trustees?
OR
Dr. Keli`i Akina

SO COMPARE AND DECIDE!

COMPARISON #1
-- OLD GUARD TRUSTEES:
Have wasted over $33 Million on pursuing a racially separatist, federally-recognized nation: i.e., Akaka Bill & Na`i Aupuni. (Source: See Footnote 1 below)
-- DR. KELI`I AKINA:
Leads the charge to protect public and Hawaiian assets from being wasted on race-based nation-hood schemes.  The US Supreme Court case Akina v. State of Hawaii has resulted in the shutting down of Na`i Aupuni, a waste of funds the majority of Hawaiians have rejected.

COMPARISON #2
-- OLD GUARD TRUSTEES:
Have ignored their own OHA surveys that show Hawaiians want OHA to spend on meeting real needs, not on political governance. (Footnote 2)
-- DR. KELI`I AKINA:
Will continue to fight so that OHA's wealth is spent on what Hawaiians really want and need: housing, education, jobs, and health-care, NOT on governance schemes.

COMPARISON #3
-- OLD GUARD TRUSTEES:
Have endangered the Hawaiian Trust Fund that, according to an OHA-commissioned audit, "will run out of funds" within a decade based on current spending.  Even after the audit, OHA has continued to squander money on junkets and connected insider projects. (Footnote 3)
-- DR. KELI`I AKINA:
As one of Hawaii's leading watchdogs, Akina will continue to expose OHA's financial waste and mismanagement.  Akina will bring financial reform, transparency and public accountability to the OHA board.

Please pass this information on to others and consider contributing to our campaign at:  www.keliiAKINA.com/donate

BECAUSE OHA NEEDS A WATCHDOG!